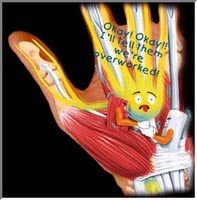 Carpel Tunnel Syndrome is the most common nerve compression disorder of the upper extremity. It is a potentially devastating disorder. It affects a wide range of the population. People who work or participate in recreational activities which require a great deal of use of their hands are more prone to this condition. A simple repetitive action such as clicking a computer mouse or typing, when done continuously, can cause this condition. Something as serious as repetitive injuries to one’s hand or wrist area may also cause Carpel Tunnel syndrome.

Preventing this syndrome is an exceedingly difficult process. Tools, workstations, and many other things which cause you to twist your wrist in awkward positions would have to be redesigned. Carpel Tunnel Syndrome occurs over a long period of time. When you bend your finger, your tendon moves approximately 2 inches. The tendons slide through the sheaths which enclose them. In the sheaf, there is a lubricant that allows the tendon to slide. Excessive movement causes the lubricant to malfunction and the tendon to swell and become inflamed. When this process is repeated enough times, you may get Carpel Tunnel Syndrome, which hinders tendon movement.

This condition can be solved completely by a surgery called open Carpal Tunnel surgery. Other ways of relieving Carpel Tunnel Syndrome include medicines such as corticosteroid injections, wrist splints during the night, or just stopping or reducing the number of repetitive movements you do.

Potency of Gingko Biloba for Elderly People (with dementia)