With Swine Flu Spreading Many Ask How to Stop It? - Doctor Solve

Home » With Swine Flu Spreading Many Ask How to Stop It? 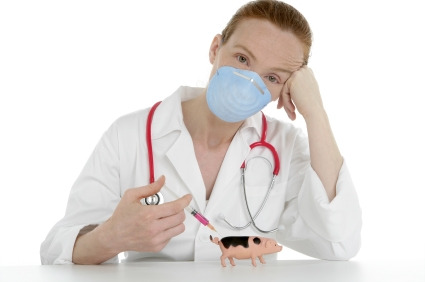 With Swine Flu Spreading Many Ask How to Stop It?

As the Swine Flu spreads many wonders, “How do we stop it?”
Swine Influenza (Swine Flu/H1N1) is a respiratory disease of pigs that is caused by type A influenza viruses. Much like the regular seasonal flu, Swine flu can be spread by human-to-human transmissions, such as sneezing or coughing.
The Swine flu has created a panic in many, but with more than 100 schools and over 3000 confirmed cases in the United States alone, and close to 5300 globally, the panic is very reasonable. Though the effects of Swine flu in the U.S have been minuscule in comparison to that of the effects in Mexico, many have to ask what will happen if it gets worse?
During the four major pandemics since 1889, each has begun with a mild spring wave, only to be followed a few months later by a devastating second wave. The most notable of these four pandemics was the Spanish flu of 1918 that killed an estimated 40-50 million people, possibly more.
Experts do, however, agree that if a second, more deadly and infectious wave of the virus is still to come, the time it takes for it to arrive will hopefully allow for the development and production of a vaccine to combat the virus. There are still preventative measures through medicine and Non-pharmaceutical interventions.
Oseltamivir, or by its brand name Tamiflu is 1 of 2 antiviral drugs approved for use in the United States, that the Swine Influenza has been susceptible to. Online pharmacies, sell Tamiflu, which has been high in demand since the outbreak of Swine Flu. The Centers for Disease Control and Prevention (CDC) recommends Tamiflu in the treatment and/or prevention of infection with Swine Influenza viruses.
There are additional ways to aid in the prevention of the transmission of Swine Influenza. Arne Duncan, Secretary of Education says, “Use the same common sense and courtesy that you would use during winter flu season: Wash your hands, cover your mouth when you cough and stay home if you are sick.” Duncan could not be more right in saying this, but there are still some more ways to prevent Swine Influenza. Make sure to get enough sleep, every night, eat a healthy, nutritious diet, and be physically active.
Pediatrician and medical historian Dr. Howard Markel of the University of Michigan said, “History is not predictive science… But what I have found, studying epidemics, is that good planning and good relationships between local state and federal authorities, goes a long way.” The United States and the rest of the world can now only wait, while the whole of humanity will have to chip in to help each other and prepare for what may come in the days, weeks, or months to follow.
DoctorSolve Healthcare Solutions Inc., a Canadian Internet-based pharmacy intermediary (license #BC X23), offers low cost, long-term prescription drugs. A professionally registered pharmacist fills all Canadian prescriptions. A certified member of the Canadian International Pharmacy Association, DoctorSolve is ranked as one of the best online Canadian pharmacies.
For more information on how to order Canada drugs safely and securely call 1-866-732-0305 or visit https://www.doctorsolve.com/ – a trusted and reliable Canadian online pharmacy since 1999.–

Is the Swine Flu Pandemic On the Way?